The main goal of this service is to emulate behavior of sensors, actuators and smart devices which is suitable for ElasTest platform. The service concentrates on providing emulated devices to realize and test Industrial Internet of Things (IIOT) applications in ElasTest. The motivation for providing EDS in ElasTest are the following:

In order to use the facilities offered by EDS, make sure that EDS is checked while configuring a TJob.

The user is advised to go through this section completely before proceeding further as this section would help user to understand the programming paradigm used in EDS.

Communication between machines in industries is generally referred to as Machine to Machine (M2M) communication. M2M communication is accomplished based on industry standards and one of them being oneM2M. EDS uses OpenMTC as a middleware for communication. The external and internal smart devices or user applications communicate using the publish subscribe paradigm.

It is an open source reference implementation of the oneM2M standard for industrial machine to machine communication. The user can find more information in the official website of OpenMTC and the open source implementation can be downloaded from the GitHub repositor. OpenMTC is a generic FIWARE enabler. In order to understand the key concepts of programming using OpenMTC, the user is advised to go through the online documentation of OpenMTC documentation page.

A key component which enables M2M communication mechanism is the Common Service Entity (CSE) or commonly addressed in the rest of the text as the oneM2M gateway or in short gateway. The gateway serves a common end point for all the entities requiring to communicate, provided they follow a certain guidelines:

The word onem2m is suffixed to access the gateway functionalities.

However, when working in oneM2M applications, it is enough to specify the path as onem2m/my_app/my_container.

The programming paradigm that can be followed to implement applications are:

Notice that the value of the key con is base64 encoded.

The figure above depicts a simple IIoT application composed of a temperature sensor, a logic and an actuator which are denoted by green boxes representing OpenMTC applications. The red boxes denote OpenMTC containers. The functionality of the application be understood as follows:

For the benefit of user, an example implementation of the IIoT application is available in the Example Implementation. The examples are self documented. Please follow the instructions in README.md.

Following points can be observed in the implementation:

EDS is a Test Support Service (TSS) provided in ElasTest which is available as a docker image (elastest/eds-base). EDS is composed of three components:

User can find the documentation of the API in EDS API.

In general the following procedure is to be followed when interacting with EDS: 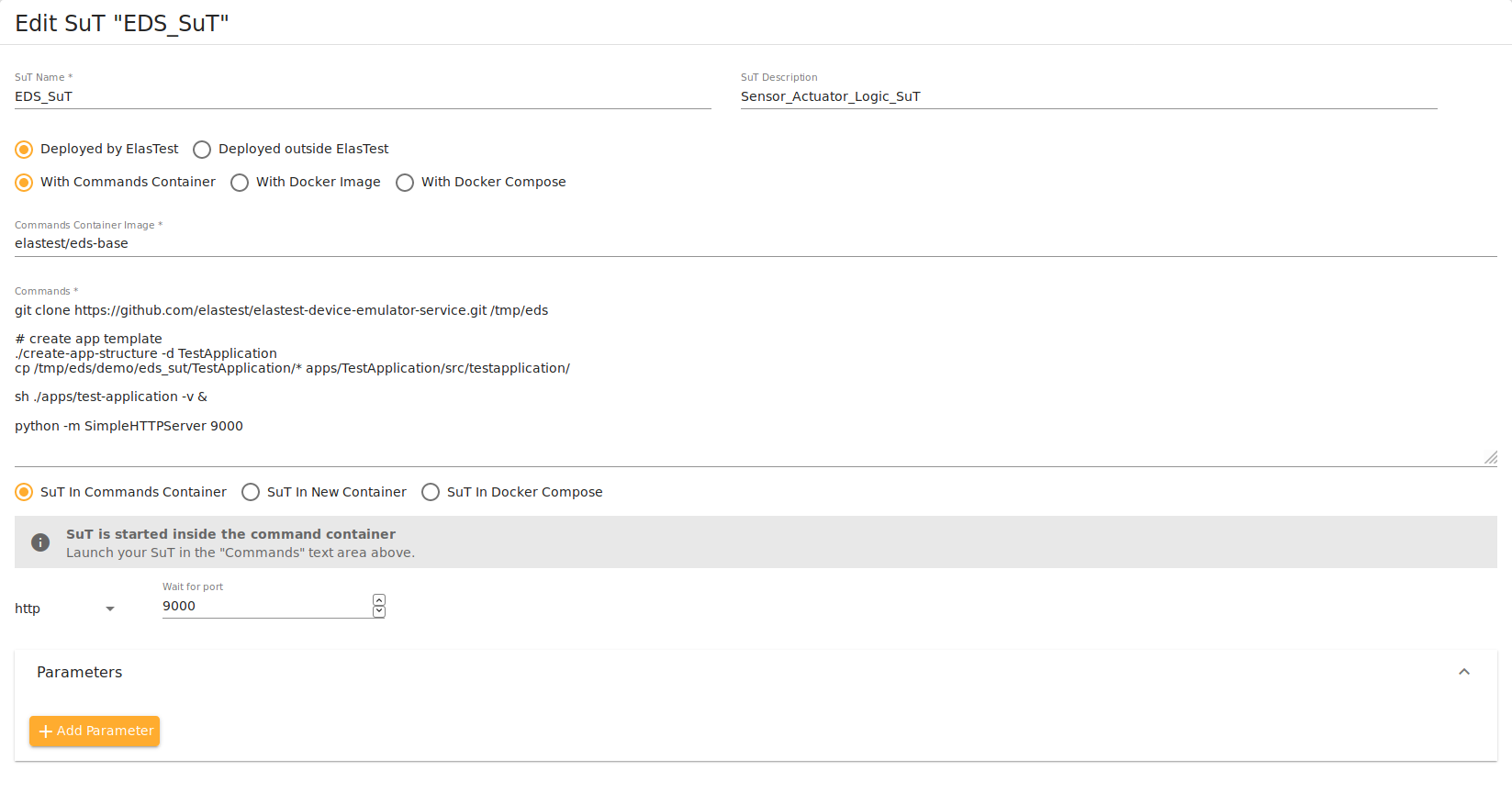 The user is encouraged to investigate the implementation of SuT which can be found in the EDS GitHub repository. The code is documented to provide hints about the working. 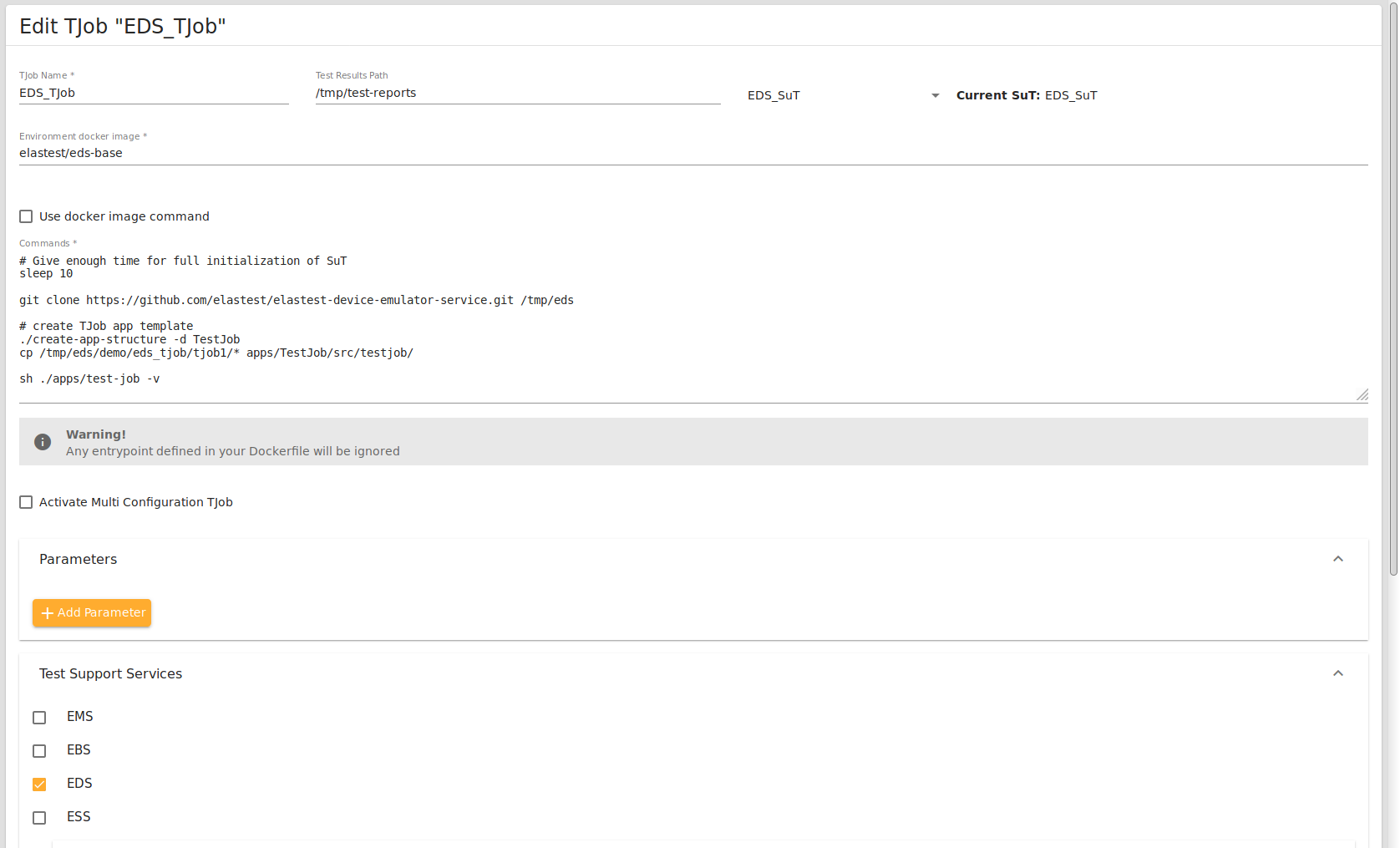 The above figure provides the configuration of TJob. The TJob is also an OpenMTC application, where the __on_register method is modified to subscribe to the available containers initialized by SuT. The TJob subscribes to the containers and verifies the functional aspects of the working of SuT in run time. For example, the TJob verifies for every input provided by the sensor to the data container, the time duration between successive inputs which should not be greater than 6 seconds. Furthermore tests are implemented using the unit testing framework of Python and the tests are run using the xmlrunner to produce test results so that ElasTest is able to analyze the results produced.

The test configuration is as follows:

It is to be noted that both SuT and TJob rely on the environment variable ET_EDS_EDS_BASE_API to locate EDS and thus the OpenMTC gateway. This modification can be found in the __main__.py file under the SuT and TJob repository locations.